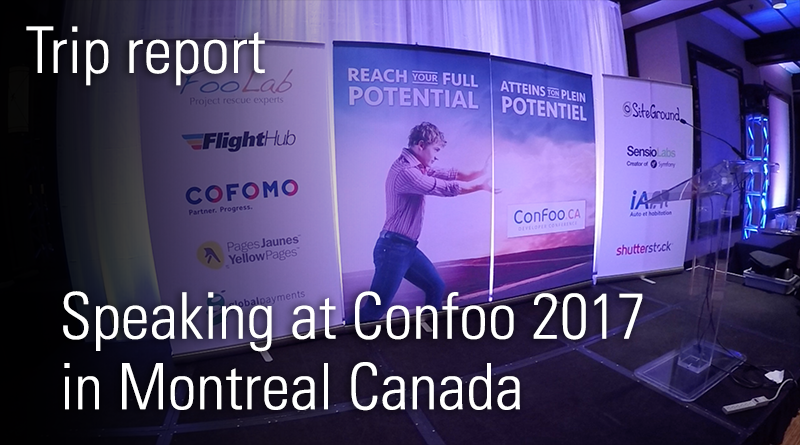 Confoo is a multi-technology conference for webdevelopers in Montreal. I was invited to speak at the event and did 2 presentations: one about Varnish, and one about ElasticSearch.

This wouldn’t be a proper trip report without the actual video. Here it is: my week in Montreal summarized in 9 minutes.

It was a challenge to keep it that “short”. Hopefully this video gives you a sense of the vibe when I’m on the road.

Traveling across the Atlantic for free, staying in cool hotels, hanging out with interesting people, having good food. Seems like I got it all figured out right? Not really! These trips come with a mission and that missions is to evangelize.

Regardless of the amount of fun I had, I can never lose track of the mission. When I say evangelize, this is what that means for this trip:

My first presentation took place on Thursday and was called Varnish In Action.

It was an opportunity to convey my knowledge about Varnish and to share my philosophy about developer empowerment, and the power of using HTTP best-practices.

Luckily I brought my mobile recording rig and managed to record my sessions. Here’s the footage for my Varnish presentation:

And here are the slides that were used in the talk:

I guess I did an OK job, see for yourself. I had a great audience and I even managed to raffle 3 copies of my book:

Thanks for real life examples and thanks for the book! #ConFoo pic.twitter.com/MT1GXQuZAn

My second presentation was on Friday and was about ElasticSearch. The titel of the talk wasn’t that original: ElasticSearch In Action. I need to come up with more original titles.

I also recorded it, but it was in a bigger room, so I had a tough time choosing the right angle. Hope it doesn’t bother you that much:

And here are the slides:

It went well, the crowd was great and I got some good feedback on Twitter:

One of the best talks I've attended to, you rock @ThijsFeryn Hope we will see you around again ? "Merci" #confoo https://t.co/xkoR5Z4NxF

The organizers of Confoo do a great job keeping the speakers entertained. Every night there’s something happening and that’s a great opportunity to talk to people. Here’s a short overview of the activities that were planned:

The journey is always an important part of the trip. I’m a bit of an airline and hotel loyalty geek. This mean I pick my flights, train rides, cab rides and hotels carefully.

I got to hang out at various airport lounges. Some were good, some were OK, one was really good.

It’s been a while since I last flew from pier B in Brussels. Apparently the non-Schengen Brussels Airlines lounge was remodeled and is now called The Suite.

The domestic Air Canada Maple Leaf lounge in Toronto wasn’t that spectacular. Although the food selection was better than in Brussels:

The international Air Canada Maple Leaf lounge in Montreal was spectacular. It lots of natural light, the furniture was modern, there was some green there. But the coolest feature: a chef who makes fresh Asian stir fry.

Spending some time in this awesome @aircanada #lounge before I fly back home. ✈️

The international Air Canada Maple Leaf lounge in Toronto was big, boring, but it had a nice hot buffet.

The conference hotel was Hotel Bonaventure. That’s also where the conference is. It’s located right in the Downtown area, across from Central Station. It’s modern, it’s not charming, but it’s still more than good enough. 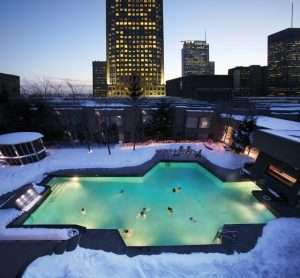 The previous time I stayed there, it was a still a Hilton. I did notice some remodeling in the lobby.

The hotel comes with a nice executive lounge where you get complimentary breakfast, snacks and drinks. I booked a room that allowed me to access that lounge. Very convenient and not more expensive than the full-blown breakfast buffet in the restaurant.

I also liked the heated outdoor pool. With temperatures at around -18° C, being outside in your swimming trunks is rather interesting. Loved the hot tub, didn’t like the freezing cold entering and leaving it.

Normal people would book there complete stay there, I’m not normal.

Because of my loyalty to Starwood Hotels and the SPG program, because of my love for the W Hotel brand and because it was reasonably priced, I stayed at W Montreal the first and last night of my trip.

As an SPG gold member, I get complimentary upgrades. They upgraded me to a fabulous room without me having to ask.

I really enjoyed the W, I loved the room, I loved the friendly staff and having pancakes with Canadian maple syrup for breakfast is awesome!

Montreal is a great city, the Confoo crew runs an awesome event, the activities were great, the journey was enjoyable.