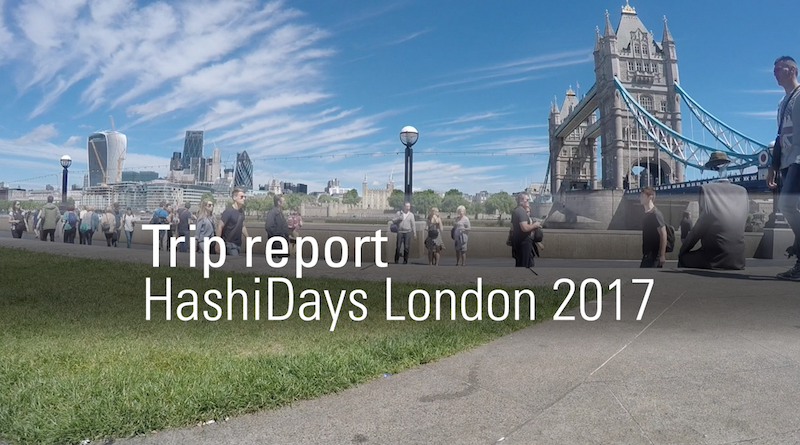 HashiDays London is an event I attended with a bunch of my colleagues. The conference is organized by HashiCorp, the company behind popular open source tools like:

HashiCorp is such an interesting company: they’re great at solving problems that are typical for the current era of dev and ops:

In that respect, it made total sense to me to travel to London and to attend HashiDays.

As usual, I made a trip report where I mix business and pleasure: the London sights and the HashiDays London 2017 vibes.

The “Hashi” in HashiDays and HashiCorp comes from the lastname of the founder: Mitchell Hashimoto.

The first talk we saw when entering the venue, was Mitchell’s keynote. It gave us a view on the current state and the future of the HashiCorp open source tools and the enterprise options they offer.

The other HashiCorp co-founder, Armon Dadgar, also gave a talk. His presentation was all about their latest tool: Nomad.

There were plenty more other talk I enjoyed. More specifically: the multi-cloud Terraform demo by Paddy Foran and the Terraform talk by Nicki Watt.

HashiDays was great! I learned a lot and got the opportunity to ask some questions to Mitchell and his crew.

Keep up the good work, Mitchell, you’re doing it right!

And by the way: