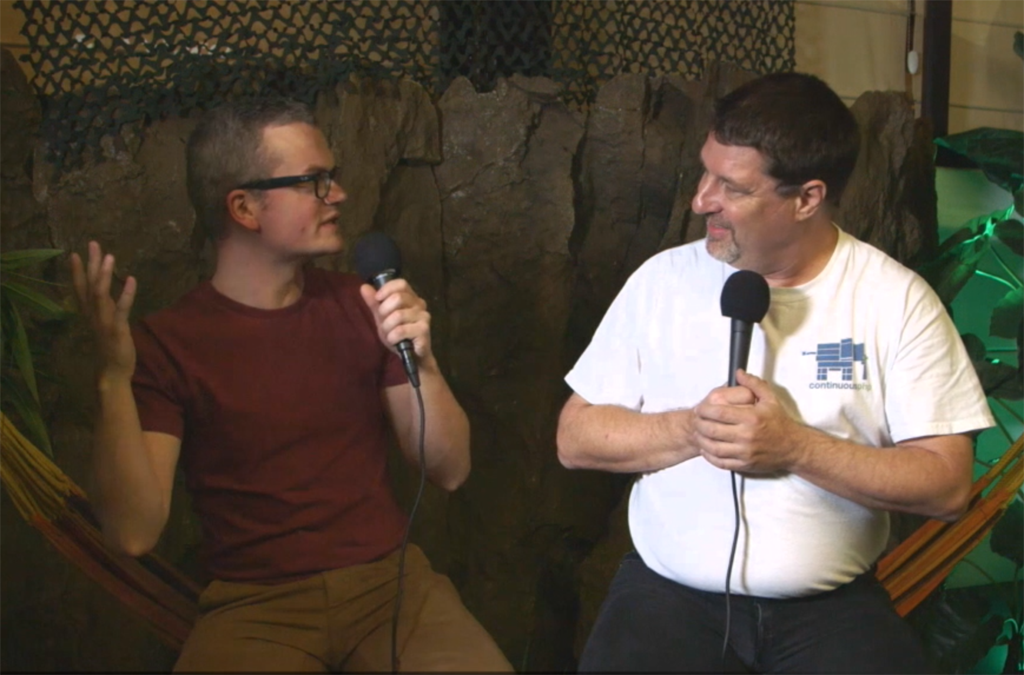 Cal Evans is my guest on this episode of the show.

The interview was recorded at PHPBenelux Conference 2016. Cal Evans was invited as the keynote speaker which he was very excited about. He had keynoted our very first edition back in 2010 and now he was back. Over the years there was quite some talk about inviting him back, but up until recently it never really worked out.

He obviously did a really good job.

The central theme of the 2016 edition of PHPBenelux was Welcome To The Jungle. We went all-out and decorated the expo hall like an actual jungle. This explains the setting. The interview was recorded in an area that we called the community village.

The community village had lots of bamboo, camouflage nets, palm trees and other jungle-style decoration.

All about Cal Evans

Cal is a true community animal and has been involved in open source community work for more than a decade. He has become the go-to guy for all things community in the PHP scene.

He currently runs the Training and Certification program at Zend Technologies and has an outstanding track record as a developer advocate.

Cal also runs his own company with his lovely wife Kathy. The so-called Evans Internet Construction Company is the company behind well-known community initiatives such as:

In this interview we talk about developer advocacy and community relations. We focus primarily on the personal branding and marketing side of things. As a developer advocate/evangelist it takes quite some effort to build up your brand and to maintain it. We explain how we do it and how we measure success.

We ask Cal to name the motto by which he operates.

The answer was no suprise: Community Works.

I had a lot of fun doing this interview. I even got a bit carried away at some point. That probably explains why I’m talking so fast.

Here’s the audio. There’s a bit of background noise because the recording was done in a very busy room, but it doesn’t impact the quality.

You can also subscribe to my podcast on iTunes.